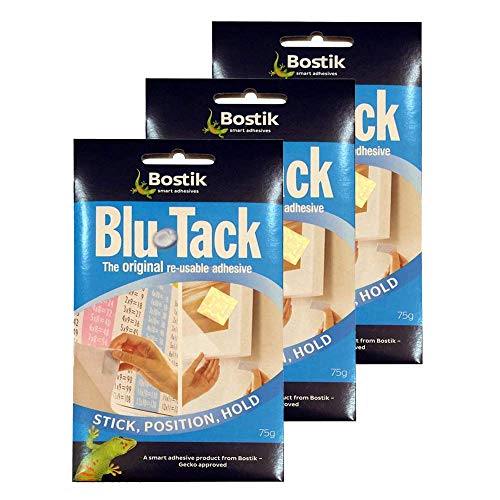 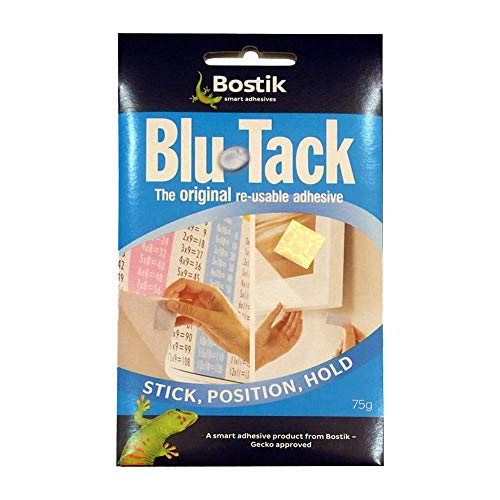 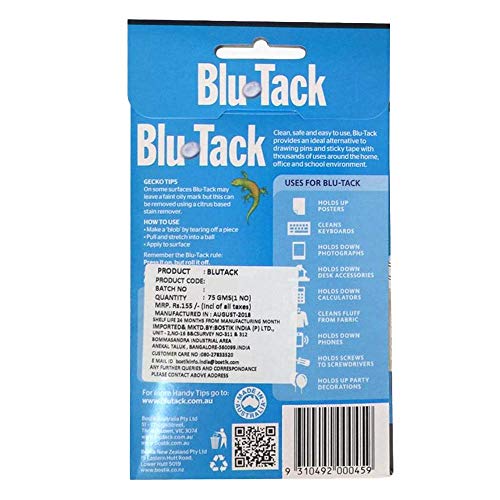 Bostik Blutack Reusable Adhesive 75gm Pack Blu Tack is the original reusable adhesive. The unique formula makes Blu Tack distinct from all the imitations that have attempted to challenge its market dominance. Blu Tack offers a clean, safe and a simple alternative to tapes and pins. It also benefits from the customer loyalty that has been built up over the last 30 years. Bostik Blu Tack product is readily recognised by parents of school age children, children and educationalists. Because Blu Tack is able to complete a wide variety of tasks, it has become a household necessity since 1971 Blu Tack is so well known that it’s become an icon in Australia and the United Kingdom. Preparation Blu Tack is ideal for non-porous surfaces such as glass or metal, painted surfaces and vinyl coated wallpaper. Ensure surface is clean, dry, free from grease and loose materials. Make sure hands are clean before handling Blu Tack. 1. Posters Cut 3cm piece, remove release paper from one side an affix to surface. Remove the release paper on one side, apply to one surface, then remove the other release paper. Using good thumb pressure, apply to the other surface. Blu Tack works because its pressure sensitive so the more even pressure you apply the better the bond. 2. Objects Make a blob by tearing off a piece, pull and stretch into a ball and apply to one surface. Removing Blu Tack Blu Tack works on walls because its pressure sensitive so its important to carefully roll it 0ff. Any remaining shreds can be removed by roll or dabbing with another blob of Blu Tack. If Blu Tack has been on a surface for sometime, dab with Citrus based stain remover to soften, then roll off carefully. Sometimes, Blu Tack can leave a faint oily mark that can be easily removed by using a citrus based stain remover. Reuse. Blu Tack can be reused. Simply roll into a ball in your hand and massage to get it pliable and apply

75gm Pack
The unique formula makes Blu Tack distinct from all the imitations that have attempted to challenge its market dominance
Blu Tack offers a clean, safe and a simple alternative to tapes and pins.