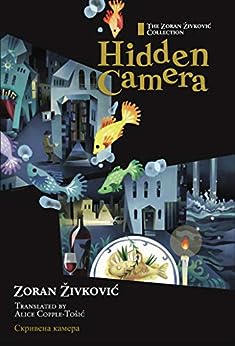 A quiet, somewhat neurotic undertaker spends his days caring for his exotic fish, and of course his silent bodies as they arrive. One day, quite out of the ordinary, he receives a ticket to the movies. The movie, however, turns out to be of him, apparently filmed without his knowledge! Convinced that he is being targeted by a TV reality show, he plays along, only to be dragged from one adventure to the next, in a fantastic journey that evolves into a story of love, of death, and of ultimate creativity.
And through his travails we discover new perspectives on our own roles in an increasingly insensitive and scripted world.
Hidden Camera was nominated for the 2007 International IMPAC Dublin Literary Award.